Camp scroungers come in all shapes and sizes and range from the welcome –  bush baby,  banded mongoose  – to the unwelcome like vervet monkeys and baboons and the downright scary such as elephant and lion. 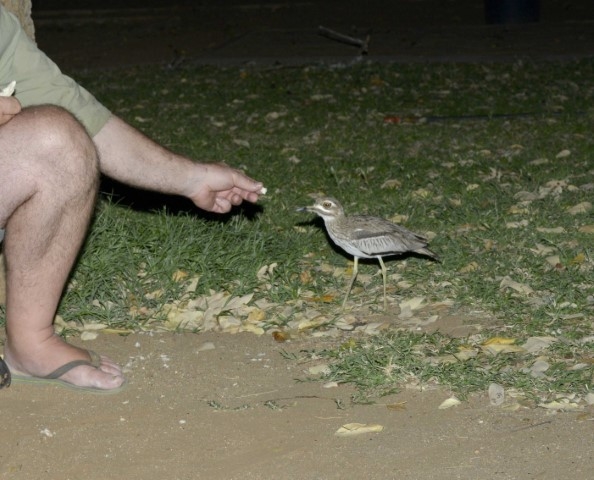 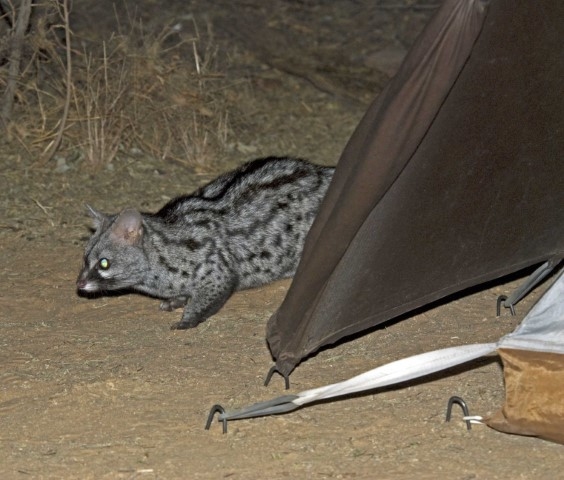 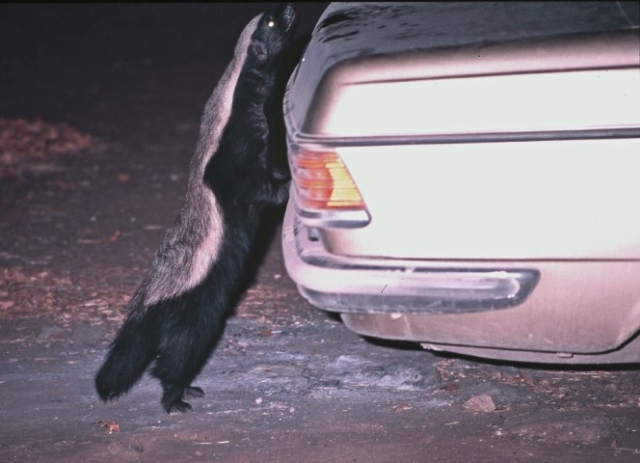 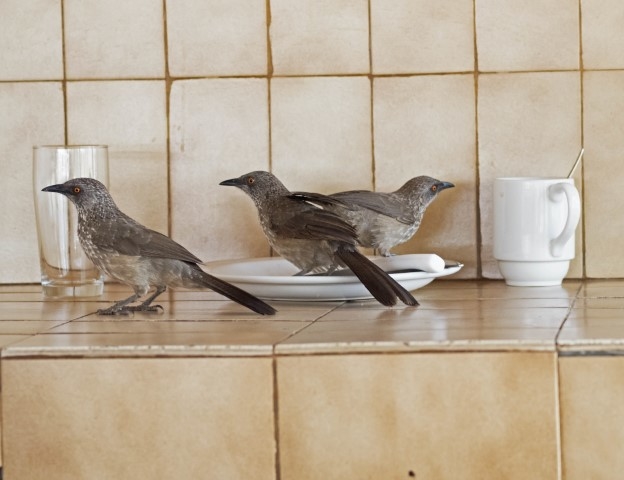 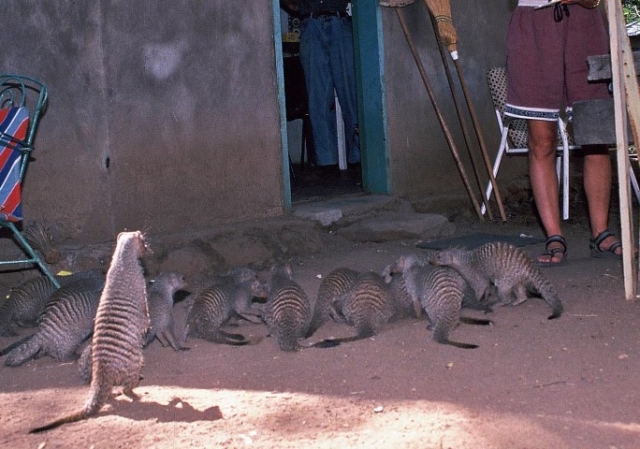 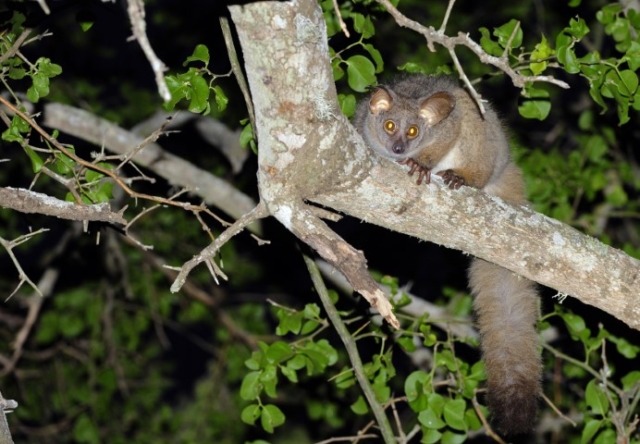 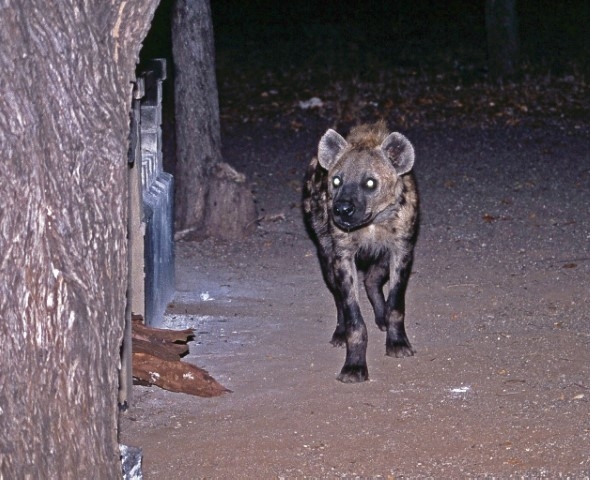 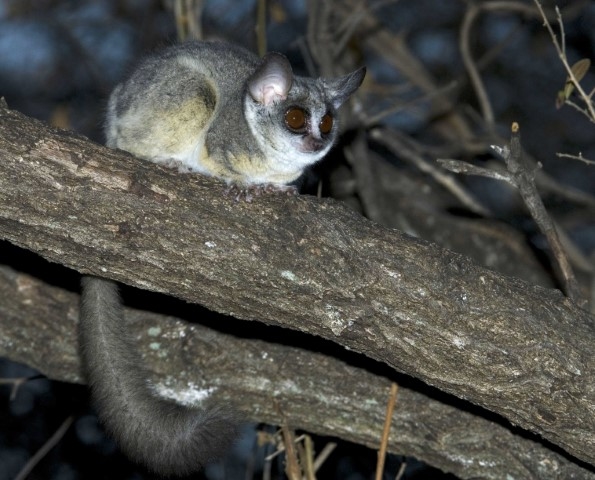 They are part and parcel of the bush experience and – while you should of course always follow national park instructions never to feed them – they are usually a delight to have around the camp.

What’s not to like about having Natal Spurfowl pecking around your table as happens in nearly all the camps in the Kruger National Park?  The francolin are usually in competition with a range of other feathered scroungers including yellow and red-billed hornbills;  arrow-marked babblers and Greater Blue-eared Starlings which get outnumbered by Burchell’s Starling if you happen to be staying at Satara camp.

For a photographer,  camp scroungers are great because they are accustomed to people and allow a close approach.   My best genet shots were taken at the Witsand reserve in the Northern Cape and I got my best yellow mongoose shots at the Kalahari Tented camp in the Kgalagadi Transfrontier Park.

But while some camp scroungers are a delight others need to be treated with caution.

One private camp I stayed at regularly in the far north of Limpopo Province had a resident group of banded mongoose –  known as “commando meerkat” by the local farmers –  which is an excellent name because it describes perfectly the way they travel about in a pack – or commando.

They became incredibly tame and having your camp invaded by a posse of “commando meerkat” was quite an experience.

Others – like honey badger –  were fascinating to have in camp because you so seldom see them in the wild but had to be treated with caution because this predator’s reputation for toughness and ferocity is well-earned.

Then there are the ones that you could actually do without.  In Mana Pools in Zimbabwe those were the elephant which developed a sweet tooth for oranges and used to searched the campsites for them.    Zimbabwe National parks eventually banned the importation of citrus into Mana Pools back in the 1980s.

But the scariest camp scroungers I ever encountered were lion and that happened on two occasions.  The first was camping on the lake about 20kms from Kariba town in 1990. We had the place to ourselves and – the one evening – I noticed that a herd of impala had gathered together in a large open area in the centre of the unfenced camp.    I found out why a couple of hours later when I shone a torch around to see why it had gone so suspiciously quiet and discovered a pride of lion moving silently through.

The second occasion was in a hunting camp in the Zambezi Valley and this time I  stayed in my tent listening the mayhem taking place 50 metres or so away.

The camp cook  – nicknamed “Lucky Eddie” after the Hagar the Horrible cartoon character for what should be obvious reasons  –  was sleeping in the open and woke up at 3am to find a lion standing on the end of his bedroll eyeing the drying biltong that Lucky Eddie had festooned in the branches above him.

Fortunately for Lucky Eddie one of the Zimbabwe National parks rangers also woke up. He grabbed a smouldering log from the fire and chucked it at the lion.

The resulting burst of roaring and yelling woke me up but not the hunter whose camp it was –  who shall remain nameless – and who slept soundly through it all snoring his head off.   A few elbows in the ribs from his wife eventually got him into action and he chased off the lion by firing a couple of shots into the air.

A still-shattered Lucky Eddie confided to my wife while cooking breakfast the next morning that, “Madame,  I am not a religious man but last night I thought about God a lot.”